Mansager and his partner, Goodspeed, dominated the men's circuit for 15 years and won five consecutive Men's Nationals, a record that may well survive the test of time.

Known for his amazing forehand return of serve and his patience, Scott Mansager was one half of one of the most prolific teams ever to play Platform Tennis. Scott and his partner, Flip Goodspeed, dominated the men’s circuit from 1996 to 2010 winning eight Men’s National championships, including five in a row from 1996 to 2000, a record that may never be broken. The feat earned them recognition in Sports Illustrated’s “Faces in the Crowd.” The duo were back in the winner’s circle in 2002, 2004, and 2008, and were finalists in 2001, 2007, and 2010. On moving into the Senior ranks, Scott and Flip won the 45+ in 2008 and 2009. Winning a Senior and Men’s Nationals had been accomplished only once before, by Richard Hebard in 1961. Mansager also teamed with Hall of Famer Sue Aery to win the 1999 Mixed National championship, becoming only the third player in the history of the game to win Mixed and Men’s Nationals in the same year. Scott also served on the APTA Board of Directors from 1998 to 2002

Scott and Flip were tremendous athletes and tough competitors who dedicated themselves to achieving their maximum potential through teamwork, preparation, and a devotion to physical fitness, particularly around national championship tournament time. The success they had is all the more remarkable given that they lived and practiced in different cities, meeting just a few times to play before traveling to the mere 3-4 tournaments they played per year. Even more importantly, as a champion, he was an outstanding sportsman, ambassador and role model.

After a career in the technology world, Scott became a highly respected paddle pro in Chicago. 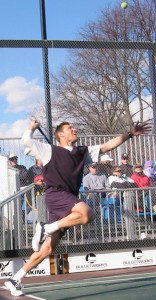 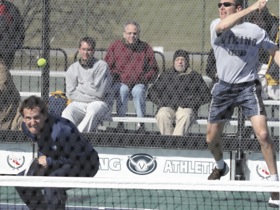 Goodspped (net) and Mansager in 2007 Men's Nationals at the New York Athletic Club in Pelham, NY