The game in the Rochester area owes much to Frederick J. "Fritz" Odenbach, an accomplished player who always put the game first. Odenbach served two terms on the APTA Board, headed the Men's ranking Committee for over two decades and chaired four memorable Nationals.

Rochester, NY, would not be the Paddle Mecca it is today without Fritz Odenbach. As a family owner of Shadow Lake, he helped build two public courts in 1979, and has hosted the Shadow Lake Tournament 29 consecutive years. The Halloween parties at the “White House” were legendary and helped define why platform tennis is such a sociable and fun game, both on and off, the court. During his open era playing career, Odenbach achieved a National Ranking as high as 5th, winning. the Men’s 45+ Nationals in 2006 and the 55+ in 2010. He was also a finalist in the 45+ in 2000, the 50+ in 2011, and, with his wife, Sandra, in the Husband-Wife Nationals in 2007 and 2009. Fritz also won numerous regional (mostly National Ranking) tournaments, in Rochester, Cleveland, Pittsburgh, and Toronto. Odenbach served on the APTA Board on two occasions, from 1984 to 1987 as President of the original Region VI, and again from 2000 to 2006. He headed the Men’s ranking committee for more than 20 years, an arduous task during the busy playing season that requires careful attention to detail.

Odenbach always put the game first. In the early 1980s, he worked with the Region IV President to realign the western regions, even though it meant his region (Rochester and Toronto) was merged into Region IV, and a new region, which included Chicago, was created. Fritz also chaired the hugely successful and fun National’s four times, in 1988, 1996, 2000 and 2008.

Everybody in the game knows Fritz. He is a tough but fair competitor on the court, and a true gentleman off the court. When involved in a paddle event, he is always thinking about the other players, reaching out and engaging with them, ensuring that everyone is enjoying themselves and having a good time. He is the consummate ambassador of the game and friend to all.

A close friend in Rochester notes that, “There were guys before the Odenbachs who started paddle tennis in Rochester, but without them it would not have taken off like it has.” From the two courts he helped to build, the city now has five. In a recent article in the Rochester Democrat & Chronicle Fritz was described as “a player and pioneer” and the author adds that, “Odenbach’s name in platform tennis circles is as solid as the concrete, stone, and asphalt that his family’s business, The Dolomite Group, has provided for roads and buildings.” 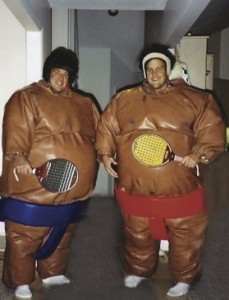