John P. Ware’s first achievement was changing the color of the original white ball, which was hard to see, into an orange one with the use of spray paint. Eventually,he got the ball to be manufactured that way, until the change to yellow took place. He served as Secretary of the APTA from 1959 to 1961, and as President from 1961 to 1963. He inaugurated the first APTA Junior Boys National Championships in 1963, and designed the crossed paddles and ball that was used on stationery, trophies, ties, scarves, and everything that represented the APTA for years. As Blanchard’s son-in-law, Ware became the game’s historian, writing numerous articles on the game and helping to publish books. With his wife, Molly Blanchard Ware, he put together the first and only – and truly magnificent - slide show presentation on the history of platform tennis. It was shown first at the Princeton Club in October 1976. (Fox Meadow Tennis Club).

Ware, a graduate of the Brooks School and Princeton University, served as a First Lieutenant in WWII and Korea, where he was awarded the Bronze Star. A pioneer in marketing paperback books, Ware worked for Pocket Books, Simon & Schuster, Reader’s Digest and John Wiley & Sons, and was honored by the Bureau of Independent Publishers and Distributors for ‘”Outstanding Service to the Industry and to Education.” He was an avid sailor and co-author of eight editions of The Cruising Guide to the New England Coast.

Brook Kindred, who made the induction presentation, started his introduction with this sentence: “The man we now honor has spent roughly 40 years of his adult life nurturing and promoting the game of platform tennis.” He continued, “This man had the titles, but when his tenure was over, he didn’t move on; rather, he continued to work for the game.” Ware was regularly called upon to serve on numerous tournament committees, and was always willing to accept any responsibility,. He was, in fact if not in formal title, the game’s historian and it is safe to say that Ware knew more about the history of the game than anyone. He helped with the publication of Oliver Durrell’s The Official Guide to Platform Tennis, published in 1967, which drew heavily upon his father-in-law, Fess Blanchard’s, earlier two books, Paddle Tennis (1944) and Platform Paddle Tennis (1959). Ware also wrote a chapter on the game’s history in Dick Squires’ first book, and was responsible for numerous articles on the game in The New York Times, and various journals (Time, Sports Illustrated, On the Sound, The National Observer, Travel and Leisure, Country Journal, and American Way).

With his wife, Molly Blanchard Ware, he put together platform tennis’ first and only historical slide show presentation. This slide and audio presentation has been digitized and is available in the Museum Archives. It was shown again a few years ago at the Fox Meadow Tennis Club in Scarsdale, New York, which is known as the “Home of Platform Tennis,”,when a special anniversary of the Club was celebrated.

He served as secretary of the APTA from 1959 to 1961, during which time he did extensive research on format, size, and timing of tournaments and the composition of paddles. And, as President from 1961 to 1963, he was instrumental in bringing young people into the game when he inaugurated the first APTA Junior Boys National Championships in 1963. Another of his contributions, during his tenure as President, was designing the crossed paddles and ball insignia for the Association. The logo was modernized in the late 1970′s, but Ware’s original design remains on the crests presented to Hall of Fame recipients and past Presidents.

But, perhaps his most important contribution had to do with the color of the balls used in play. Platform tennis balls were white, but that proved to be a difficult color when playing against a snowy background and during the night play that was becoming popular. Ware decided to color the balls in his basement with spray cans of orange paint. Eventually, he got the orange ball to be commercially manufactured, and used before it gave way to today’s optic yellow.

Ware served as President of the Fox Meadow Tennis Club (1975-1976), was a trustee of the American Yacht Club in Rye, NY, an elder in the Hitchcock Presbyterian Church, where he was also a bass singer in the choir, a member of the University Glee club in New York City, and an officer in the Princeton University Class of 1944. 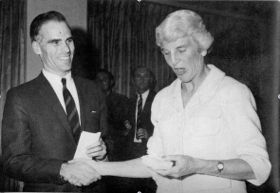