Robert Kingsbury was a key figure in platform tennis in the 1970s and 80s, as both a player and an APTA officer. He was arguably the top forehand court player of his era and as APTA president from 1978 to 1980, he helped in the game’s transition from a game to a sport to a business while keeping the average player involved and interested— a difficult balancing act.

Robert Kingsbury was a key figure in platform tennis in the 1970s and 80s, as both a player and an APTA officer. Along with his “true partner and soul-mate, John Mangan,” he won the Men’s Nationals in 1972 and 1973, and was a finalist three times, in 1970, 1971 and 1975. As a player, Bob was arguably the top forehand court player of his era. As APTA president from 1978 to 1980, he helped in the game’s transition from a game to a sport to a business by getting Coca-Cola and Seagram’s to invest at the national ranking level. But, while prize money was important for growth, the health of the game required keeping the average player involved and interested—a difficult balancing act, which Bob handled well. He also enlisted Hertz to underwrite events for club-level players, culminating in the two-day President’s Cup that remains one of the high points of each paddle season. Bob’s leadership also took platform tennis to 6th Avenue in New York City, where Dick Reilly assembled an aluminum court in front of the Burlington Building for the Pro Keds Championships, and also to the revered Forest Hills tennis stadium where the Tribuno World Platform Tennis Championships were held.

Kingsbury’s father, Oliver Kingsbury, was a long-time member of the Fox Meadow Tennis Club where he encouraged Bob to watch, emulate and eventually play with his childhood heroes, including Zan Carver, Dick Hebard, Bill Pardoe and George Harrison. Carver eventually made a paddle player and partner out of Bob and then introduced him to his longtime partner Mangan. It’s no wonder he turned into such a fine player and supporter of the game. His quickness was spectacular and his ability to chase down opponent’s apparent winning shots and then regain lost court position were unequaled. On shots off the wire he literally jumped for propulsion. He excelled in a game where a powerful service return is mandatory—and in the days when rackets were made of wood, not the offensive weapons of today’s technology

Mangan recalled one of Bob’s spectacular gets during a match in Detroit. While chasing down a lob that had gone over his head, Kingsbury made the return but slipped and his legs went through the snowboards, so he was half out of the court. Mangan kept the ball in play for a few more exchanges with high lobs while Bobby struggled to extricate his legs. Finally, he got free, jumped up, and the point continued for several more exchanges until they won the point.

Through the years, Bob was a true promoter of our game and never said “no” when asked to do more. He and John played in countless exhibitions, from sunny Florida all the way north to Detroit and Toronto. He also was able to develop sponsors for the game during a time when many top players were both tennis and platform tennis professionals. His cultivation of Coca-Cola as a sponsor lead to the commissioning of the now familiar platform tennis painting by marine artist Robert Sticker. This accurate depiction of the game being played at its “home,” Fox Meadow Tennis Club, has become iconic, and reproductions still serve as prizes for tournaments, and gifts for platform tennis lovers. When Seagram’s provided funding for the Vat 69 Gold Cup Tourney in 1973, an invitational event in Hilton Head Island that was the first championship platform tennis event held in the south, it was fitting that Bob and John won. The the following year, the duo also won the tournament in Amelia Island, the first one televised nationally.

Kingsbury was born and raised in Scarsdale, NY, and graduated from Scarsdale High School in 1954. In high school, he was quarterback for the football team, played basketball and tennis, and, with his future wife, Clare Russell, was voted “Best Couple.” Bob then went on to Williams College where he played basketball, tennis and squash, as well as Dixieland Jazz with Phinney’s Favorite Five. He graduated in 1958 with a BA in Chemistry, married Clare, and joined the N.W. Ayer advertising agency in Philadelphia, later moving with the company to New York in 1959, and on to Detroit in 1980. Along the way he and his wife raised three children, Linda, Mark and David, while living in Philadelphia, PA; Edison NJ; Scarsdale NY; and Franklin, MI.

Bob retired from Ayer in 1991 and moved to Williamstown, MA, while spending summers in Kiawah, SC, and then Vero Beach, FL, as well as Point O’ Woods, NY. Retirement was filled with family, golf, and traditional jazz, leading and playing clarinet with the Williams Reunion Jazz Band, an active, touring, semi-professional jazz band made up of talented septa- and octogenarians. 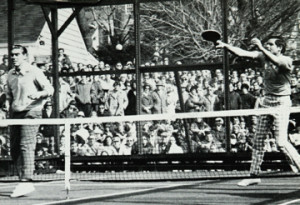 Bob Kingsbury (right) and John Mangan at Fox Meadow in 1975 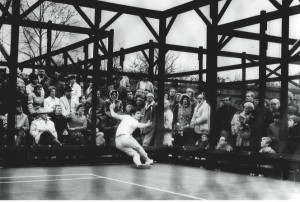 Bob Kingsbury in action at the 1975 Nationals at Fox Meadow[ 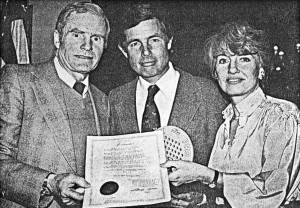