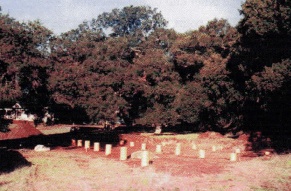 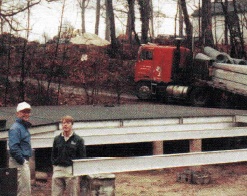 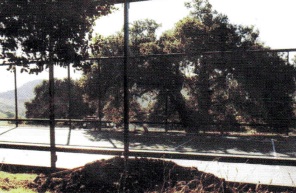 Have you ever seen a platform tennis court installed? Have you ever even thought about it? The design of the aluminum court calls for all the actual manufacturing to take place in the factory. In theory, the subsequent on-site installation is a simple process of putting the parts together like a giant erector set. In reality, working with augers (the drill to help dig footings) concrete piers, manually carrying and precisely placing 500 pound deck panels, tightly lacing steel screen sections by hand with square comers and a perfectly flat plane, working with steep changes in grade, snow storms, torrential downpours, and sweltering heat, R. J. Reilly’s installation crews might take issue with the idea that platform tennis court installations are, in fact, simple. They will, however, categorically convey that when they are through, the court will be picture-perfect and ready for the best platform tennis action you can give it! These pictures will give you a little window into their job.

1) Before the court arrives, the necessary site work is done. Sometimes, even getting to the site can be a challenge. In Jackson Hole last summer, the crew had their starting schedule slightly delayed waiting for elk to cross the road. They only had two weeks to install four courts–half the required time– but they did their best to enjoy the moment. A crew in Maine had to dodge bears each morning on their way to work. Other times, getting the materials to the site presents the problem. No one was quite sure why a family in Northern Minnesota insisted on waiting till winter to have their court delivered…until it was discovered that the only way to transport
a truckload of materials to their island was over the ice.

2) The crew digs and pours 21 concrete piers to accept the court. Even with a clean bill for the site from the owner and electric company and some advance exploratory digging, there are still many unknown encounters: Ledge, underground wires, gas lines, old or existing septic systems, or underground streams have all provided their share of unwelcome surprises.

3) After the I-beams are laid across the leveled piers, the deck sections are put in place. Each of the ten 6′ x 30′ aluminum section weighs over 500 pounds. As if the cumbersome weight isn’t a challenge enough, think of carrying these sections up a steep hill, inaccessible to a truck; or sludging through three feet of freshly fallen snow. Or for something truly exceptional, how about a helicopter delivery of the materials onto a St. Louis skyscraper! Sometimes a crew gets practice at a given site; Like the wooded hill in West Virginia they had to carry the court down–each of three times the court had to be rebuilt after suffering storm damage from fallen trees.

4) Once the deck is bolted in place, the walls are constructed. The walls or superstructure of the court include aluminum uprights, horizontal tension members, gates, light poles, in-riggers and corner posts. The light fixtures are installed on top of the twenty-foot high light poles. After the six-foot wide screen sections are hung, they are laced together to form four continuous walls with perfectly square corners. Cold weather makes this step very tough on even the most callused hands, so the Drummond Island installation on Michigan’s northern peninsula when the temperature never rose above 5 degrees was not the favorite
lacing job of one Reilly crew.

5) Once the hinged mahogany snowboards are installed, the court looks almost done. Sometimes the players can only restrain themselves up to this point before jumping on the court for a few rallies.

Now for the heating system: The heat gasketing is pulled through the spaces of each seam between deck extrusions. The skirting is custom cut to fit the court site and then nailed in place. The stairs and electrical hook-ups are the last steps and then, Voila! Crew and players agree that another masterpiece has been created.

The entire installation process typically takes an experienced crew 7 to 10 days to complete. There are exceptions. When the anticipated crate of materials got held up in customs and took longer than expected to arrive at one overseas installation, and the crew had non-refundable tickets to return home, an entire court was erected in three days flat, with the help of some local, non-English speaking laborers. On the other end of the spectrum, when a confident court buyer felt he had his own perfectly qualified builders to install the court, it took over two months. And the owner still had to swallow his pride and call R.J. Reilly to send someone to finish the job when they couldn’t get it right.

Although all of Reilly’s All-Aluminum Courts are manufactured the same way, each installation proves to be a new adventure.