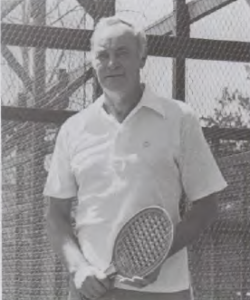 Richard K. Hebard passed away on October 22, 2007, at the ago of 93. He was survived by his wife Lois, three sons, Richard, Douglas, and Donald, his daughters-in-law, and four grandchildren.

Dick Hebard was a member of Fox Meadow Tennis CLub, in Scarsdale, New York, where he excelled in both tennis and platform tennis.

During his playing era, he won more Platform Tennis National Championships than any other man at that time. He won eight National Men’s Championships, and was a finalist twice.

Hebard also won five National Mixed Doubles Championships, and was a finalist twice. He continued to play competitively into his senior years, winning the 50-and-over Men’s Nationals four times and the 60-and-over Nationals once. In all, Hebard won 18 National Platform Tennis Championships. He also served as President of Fox Meadow Tennis Club and the American Platform Tennis Association.

Hebard was also a very fine tennis player. At the age of 14, he won the National Boy’s Singles Championships. In both tennis and platform tennis, he was a relaxed, classic stylist, and he was highly respected by everyone, both partners and opponents.

Hebard was inducting into the Hall of Fame in 1965.