When it comes to discussing the leading women players developed since the game began, selecting the “leading lady” is easy. According to Fess Blanchard, “not only has this player won more national championships, by far, than any other woman but she has done it with a number of different partners.”

For her first national championship, Madge Beck teamed with Fox Meadow member Marie Walker, but, in 1949, she began playing with her sister Maizie Moore, and the pair did not lose a single set for several years. Top-seeded nationally, year after year, the sisters won the Women’s title five times between 1949 and 1954, and with other partners thirteen times. And, in 1959 and 1960, Madge won the Women’s with her daughter, Susan Beck Wash. In mixed doubles, she has been a national champion four times, and,in singles, once.

Beck’s parents, Avent and Madeline Childress, created what was to become known as the Childress Paddle Dynasty, as for decades the family’s daughters and grandchildren held a string of national championships, stretching from 1936 to 1974. Five of the family own one or more national titles. As Fess Blanchard once said, “What the Barrymore’s are to theater, the Childresses are to platform tennis.” Madeline Childress taught all four of her daughters to play tennis, and three of them loved the game. When the girls were introduced to paddle, they took to the game like a trio of naturals. Asked to account for the family’s prowess at the game, Madge Beck said, “Genes.” The family’s competitive drive hasn’t hurt either. Accepting the APTA Honor Award, also owned by her mother and Aunt Maizie, Susan Wasch recalled as a very young girl facing her mother across the net as the national champ pounded balls at her with the admonition, “Don’t you ever back up!”

Whenever Blanchard asked someone who knew the game to name the best woman player platform tennis has produced, there was no hesitation with the answer: Madeline Beck. No one else could put away the ball at the net with her finality. No one else had a backhand to compare with hers. And few could match her competitive temperament, her ability to rise to a tight situation and produce a winning shot when it was needed most. 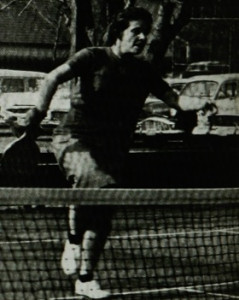 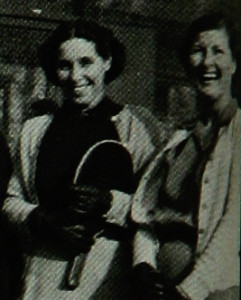